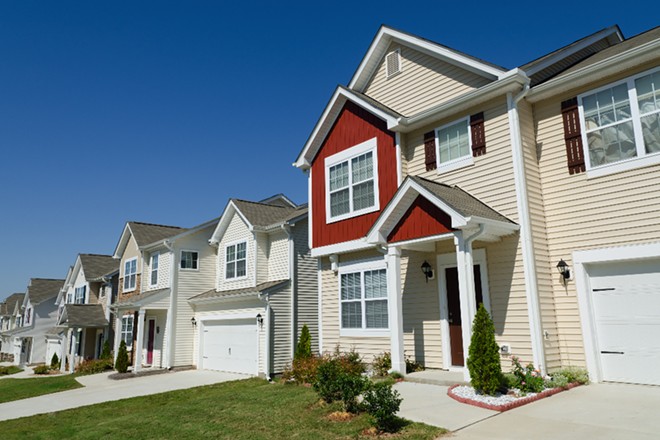 There’s no law in Orange County that prohibits landlords from discriminating against Section 8 housing voucher recipients, but that could change soon.

Currently, landlords and property managers across Central Florida can legally discriminate against or refuse to accept tenants who use a housing voucher to help cover the cost of rent. That’s true in most cities and counties across Florida, but in Orange County, that could change soon if a new local ordinance up for a public hearing later this month is approved by the board of county commissioners.

That ordinance, proposed as a “Tenant’s Bill of Rights,” would prohibit discrimination in housing based on a person’s lawful source of income.

What does that mean?

According to a draft ordinance presented to county commissioners in November, “lawful source of income” is defined as income that comes from a lawful profession or job, any government or private assistance — such as rental assistance through the Housing Choice Vouchers program, Veterans Affairs Supportive Housing vouchers, Social Security and Supplemental Security Income — as well as a gift or inheritance, a pension or other retirement benefits, and miscellaneous income streams such as alimony or child support.

Right now, it’s perfectly legal in Orange County and most cities and counties across Florida to refuse to rent to someone based on the fact that they plan to use any of these income streams to pay for housing in one of the least affordable places to live in the country. Unlike federally protected categories such as race, ethnicity or gender, protection against source of income discrimination is not listed under the federal Fair Housing Act, or under any state law. 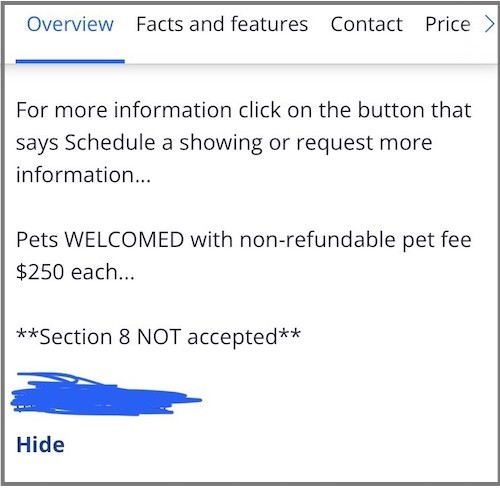 Screenshot from a Zillow apartment listing in Orange County, circa December 2022.

This can be a barrier to finding quality, affordable housing for individuals and families who are low-income, elderly or who have disabilities, according to county employees who work with these populations — many of whom often rely on some form of rental assistance, such as a Housing Choice Voucher, commonly known as Section 8.

“Most of them are working families that are making the minimum wage,” Kim Boettner, program development supervisor for Orange County’s Housing Choice Voucher program, told Orlando Weekly, regarding the county’s voucher recipients. “Which, in this day and age, we all know [it] is pretty impossible to pay rent in Orange County on minimum wage.”

Florida’s minimum wage is $11 an hour (that is, for non-tipped employees, whose hourly wage is much lower). Eleven dollars per hour adds up to roughly $22,820 annually, if you work full-time. That’s not enough to afford an apartment anywhere in Florida, let alone Orange County or metro Orlando.

The Housing Choice Voucher program is the nation’s largest rental assistance program for low-income people. The Orange County Housing and Community Development division, the county’s designated HCV administrator, has about 1,275 regular vouchers, and 600 portable Section 8 vouchers (“portable” meaning vouchers for those who move here from another county, city or state).

There’s a waitlist to get a voucher, and sometimes just getting your hands on one can take years. The last time Orange County opened up their waitlist for HCV applications was in 2018. They plan to reopen it again this March. Historically, they’ve received as many as 25,000 applications when that waitlist opens. But only a fraction of those will actually be placed on the waitlist — which, again, can take years for a local agency to exhaust.

Then, once you get a voucher, facing discrimination from landlords and property owners is the next stage of the battle. Orange County is dealing with a housing shortage. Both the county and the Homeless Services Network of Central Florida, which offers its own housing assistance program, say that a lack of units is by far the “biggest issue” low-income households are facing.

“Our housing shortage is significant,” Martha Are, executive director of the HSNCFL, told Orlando Weekly. “And so with or without vouchers, low-income households are struggling to find housing.”

Of course, landlords refusing to accept vouchers just compounds that issue. Plus, anyone who’s tried to find a new place to live here recently knows that it’s essentially a part-time job trying to find and secure a quality unit that’s affordable, even with a voucher, in Orange County. This is obviously a barrier for working families with heads of households who are already working one or more jobs — people who don’t have the time to reach out to a landlord or realtor about a unit as soon as it’s available.

That division has a good relationship with some landlords and developers in the area who have long participated in their HCV program, but their internal list of landlords willing to list their properties as Section 8-friendly has dwindled.

“I would say approximately four or five years ago, if a person came in and we handed them that list, it was four or five pages front and back. Probably six months ago, I looked at that list, and it was one page, and it was three landlords on it,” Boettner told Orlando Weekly. “We don’t have the availability of units that we have had in the past.”

Affordability, a housing shortage and the stigma attached to housing vouchers can make finding and retaining safe, affordable housing a challenge for low-income households.

With the Housing Choice Voucher program, those with a voucher can choose to live wherever they want, as long as they can afford it and it meets certain requirements.

Tenants with a HCV pay up to 40% of their income on rent, and the voucher will cover the rest — up to a limit. A unit must also be inspected by someone from the housing agency before it’s leased to the tenant to ensure it meets minimum safety and sanitation standards.

Some landlords see this as a burden. But those who work with voucher recipients say it can also be a benefit. “It’s beneficial to the landlord as well because they get, you know, they get a secure payment coming from us [the housing authority] and clients who don’t want to lose their voucher,” said Boettner. “So they tend to stay on the right side of the law, and on the right side of keeping their unit nice.”

The housing agency also has to do yearly inspections, so if a renter messes up a unit — or a landlord claims they have — there will be documentation.

But that’s if you can find a place to live. People who receive a voucher have 120 days initially to find a unit, although that can be extended up to six months. According to the Orange County housing division, that happens “constantly.”

Housing justice advocates say that refusing to rent to families with vouchers — due to stigma or what have you — is a social, economic and racial justice issue. Cynthia Laurent, a housing justice organizer with Florida Rising, told Orlando Weekly it’s also an issue that impacts the entire community, even if you’re not directly affected.

“We think that it’s important that communities are diverse,” said Laurent. “Not just diverse financially, or just in thought, but also in income levels.”

And that’s literally the point of the Section 8 program, which was renamed “Housing Choice” to emphasize a diversity of options that voucher recipients should — theoretically — have, as well as the potential economic mobility that having that wider range of options can offer.

“Our hope is that we’re making life more affordable by not displacing communities, preserving communities, and also giving communities access to just a quality life,” said Laurent of Florida Rising, which has been advocating for stronger housing and tenant protections in Orange County and across the state.

Across the United States, there are at least a dozen states that prohibit source of income discrimination in housing, which disproportionately affects low-income people, women and people of color.

Florida is not one of them.

Too busy with the war on “woke,” appeasing the corporate lobby, with many politicians raking in money from landlord and real estate trade groups that have rallied in opposition to anti-discrimination housing laws — and brazenly celebrated their wins.

But, support for bans on source of income discrimination in Florida — and various cities and counties across the U.S. — is growing.

Over the last two years, activists, labor and tenant unions, and activist groups like Florida Rising have organized in communities across Florida for stronger tenant protections, including anti-discrimination protections, rent control and guaranteed legal aid for Floridians facing risk of eviction.

In Florida, there are 9 municipalities that have some sort of ban on source of income discrimination, stretching from Miami-Dade County to various cities and counties in the Tampa Bay region, up to Gainesville and Alachua County.

These laws aren’t perfect. Landlords can find other ways to get around nondiscrimination requirements, such as raising rents just above a limit that’s affordable for someone with a voucher. Enforcement mechanisms can also vary.

In Orange County, the draft ordinance presented to Orange County commissioners on Nov. 29 proposed having the county’s new Office of Tenant Services spearhead the investigation of alleged violations, while referring complaints to other agencies and divisions as appropriate.

Enforcement of the ordinance, if approved, would begin March 1, 2023, when the Office of Tenant Services is expected to be fully staffed.

The broad purpose of the ordinance, which includes more than just a source of income nondiscrimination provision, is to provide tenants in unincorporated Orange County with an overview of their rights and protections as tenants.

It would require landlords to provide tenants with a notice of their rights prior to move-in, which include the right to 60-day notice of termination and rental increases above 5 percent; the right to reasonable notice prior to a landlord’s entry; the right to maintenance of the rental unit in line with building, housing and health codes; and the right to the return of a security deposit or written notice of a damage claim.

Pretty basic stuff, you’d think, but landlord and real estate trade groups have been fighting similar protections in Osceola County, and waged their own war in Tampa, St. Petersburg, Pinellas and Hillsborough counties prior to the passage of their own “Tenant’s Bill of Rights” laws in recent years.

Florida Rising and other housing advocates — including State Rep. Anna Eskamani — have asked for additional provisions.

“You know, my preference would be to also have things like just-cause eviction, direct access to legal aid, which right now is not always available based on how much resources our legal aid partners have, but it is the right thing to do,” Eskamani said during the public comment portion of the Nov. 29 board of commissioners meeting. “It sets a tone to prevent discrimination, regardless of how you’re paying for rent, because that’s also been a struggle for folks who receive rental assistance, but they’re denied the ability to use it.”

Orange County commissioners will hold a public hearing to discuss the Tenant’s Bill of Rights ordinance, first proposed back in September, on Jan. 24.

Next week, cities and towns have to start filing housing plans with the state. What’s coming?

Beyond the actual plans, the deadline will also serve as a litmus test for how communities — their leaders and…

Justin Alley In recent months, newspaper and television reports have repeatedly carried messages of guilty admission from the California Association…