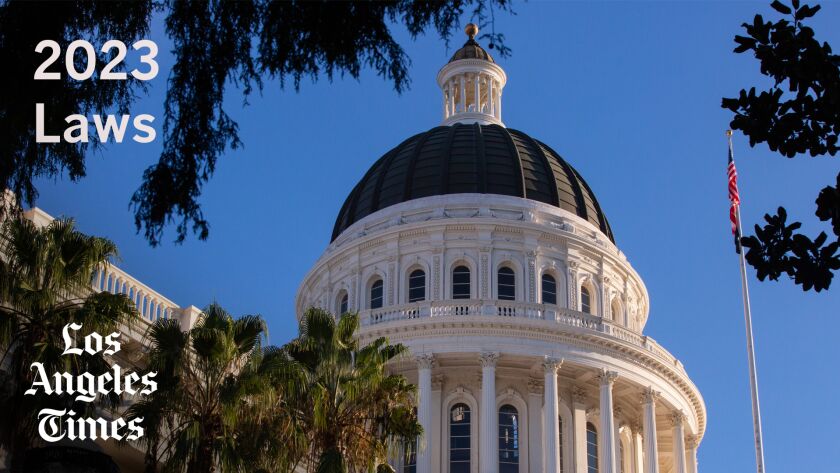 SACRAMENTO — The U.S. Supreme Court decision to strike down the landmark federal abortion rights case Roe vs. Wade led to a flurry of new laws in California, even though abortion rights already are solidly protected in the state.

Still, 2022 proved to be a fairly measured year when it comes to the number of bills approved by the California Legislature and signed into law by Gov. Gavin Newsom, perhaps a continuation of the COVID-19 pandemic lull in recent years. The Legislature sent 1,166 bills to Newsom for consideration in 2022. He signed 997 into law and vetoed 169. By comparison, California enacted 1,821 new laws in 1971, when Gov. Ronald Reagan was governor.

The Times’ list highlights a few dozen noteworthy new laws for 2023, including several that were approved years earlier but are only taking effect now. Most of those listed take effect on New Year’s Day. As in years past, the list mostly reflects the interests of the Democrats who hold a supermajority of seats in both the state Senate and Assembly.

Some of the most notable new laws make significant changes in workers’ rights and benefits, housing, criminal justice and healthcare.

Two state ballot measures approved by voters in November became law before the new year began: Proposition 1, which expressly guarantees in the state Constitution a person’s “fundamental right to choose to have an abortion and their fundamental right to choose or refuse contraceptives”; and Proposition 31, which bans the sale of most flavored tobacco products in stores and in vending machines.

Some laws set to take effect in 2023 are in limbo due to challenges, both in court and potentially at the ballot box.

In December, a federal judge struck down part of a new California gun law modeled after Texas’ vigilante antiabortion legislation that gives private citizens the authority to sue anyone who imports, distributes, manufactures or sells illegal firearms in California, such as assault weapons, .50 BMG rifles and so-called ghost guns.

Businesses and restaurant trade groups said this month that they had submitted enough voter signatures for a ballot measure to overturn a landmark California law that could open the door to workers’ wages being raised to $22 an hour. On Friday, a Sacramento County Superior Court judge put a temporary hold on the new law, which was set to go into effect Jan. 1. The oil and gas industry also is trying to raise enough petition signatures for a ballot measure to overturn a law prohibiting new oil or gas wells within 3,200 feet of a residence, education resource, healthcare facility or other sensitive area.

With the start of the new year, a slate of new laws will take effect on Jan.1, 2023. From pay transparency to food vendors, these are the laws you should know.

A 1-foot-wide sliver of land sandwiched between a road and a backyard pool. A “vacant” site next to a water…

For northern California housing politics, judgment day has come. Cities across the nine-county San Francisco Bay Area had until Wednesday…