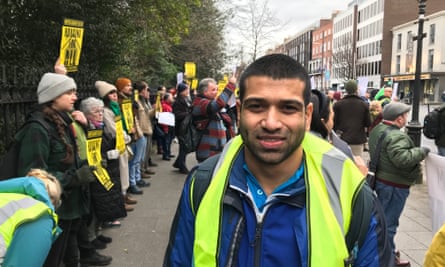 ‘There is no room’: anti-immigration protesters march in Dublin | Ireland

Ireland has long prided itself on greeting visitors with warmth, styling itself the land of “a hundred thousand welcomes”, but now there is a new slogan: #IrelandIsFull.

It appears on placards and on social media and is chanted at rallies alongside other exhortations such as #IrelandForTheIrish and #IrishLivesMatter.

They are the cry of an anti-immigrant backlash that has spread across Dublin and other towns in recent weeks, earning praise from far-right allies abroad.

“Unlike the English, who say very little, the Irish are speaking out – and protesting on the streets – about the huge number of young, male ‘asylum seekers’,” tweeted Nigel Farage.

Pickets and blockades of roads are often held outside refugee centres